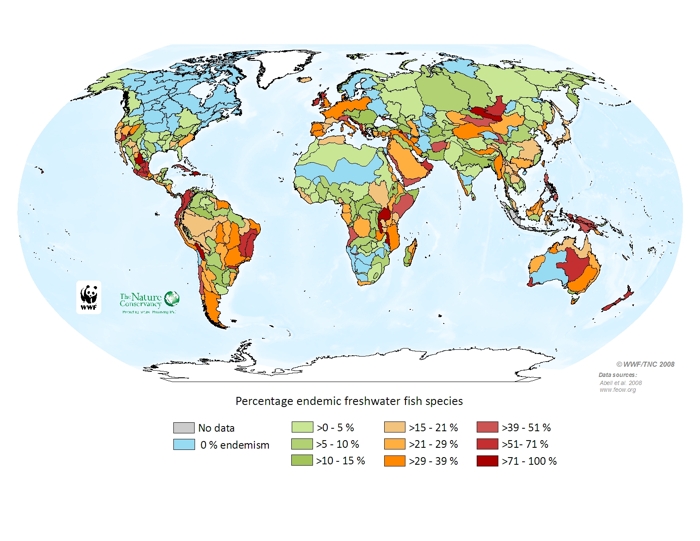 The map of percentage of endemic freshwater fish species – the number of fish species present only in a given ecoregion, divided by the total number of fish species in that ecoregion – was generated by querying a database constructed for this project. We provide this map in addition to that of number of endemics in order to highlight more species-poor ecoregions characterized by high levels of endemism. Fish data came from a variety of sources. For the United States, distribution data in the form of species assignments to 8-digit HUCs (hydrologic unit codes) were provided by NatureServe, and these were aggregated to freshwater ecoregions. For some small islands, species lists were generated using FishBase and then were augmented where possible with information from published literature. For most other ecoregions, species lists were provided by experts. For a small number of species it was impossible at this time to generate species lists, and endemism estimates are provided instead; these ecoregions are shown with hatching. The numbers shown in this map represent only species using freshwater for at least a portion of their life cycles – these species were identified using the habitat assignments in FishBase. Extirpated species are included in these tallies, but resolved extinct species, as determined by the Committee on Recently Extinct Organisms (data provided by Ian Harrison), are excluded. Introduced species are not counted.